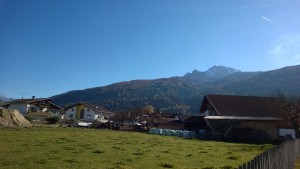 Yes my dear readers, I have arrived in my homeland Birgitz – Tyrol – Austria, or as we say Birgitz – Tirol – Österreich.

I left Tuesday afternoon from Miami Airport in a Lufthansa Airbus 380 – my favorite airplane in the world. The cabin is huge and the seats are comfortable. The food was very good – chicken with vegetables and rice for dinner and an omelet with grilled tomato and mini sausage patties for breakfast.

My favorite part though are the Flight Cameras. The A-380 has 3 cameras mounted on the outside: one on the tail 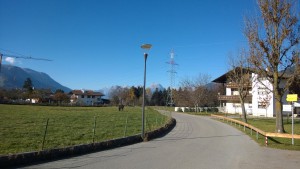 wing, one underneath and one I think on or under the nose facing forward. So you can watch what the captain sees or you can see the plane from above. It is a real treat. I watched the plane following a guide car to the runway and then take off over Miami – switched cameras to watch Miami going by underneath. Fights to Europe are overnight flights, so you get to Europe in the morning, about 7am. So I watched the sunrise with the tail camera – what a picture! You could see the curvature of the earth with the sun slowly coming over the horizon.

And then we dived into the fog in Frankfurt. It was so foggy that you could not see the airport. The lights on the runway were barely visible and it took a long time to get to the gate – we had to wait a long time to cross the runway, and the plane waiting in front of us came in and out of the fog. Very spooky 🙂 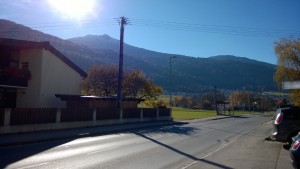 Now, I cannot fly directly to Innsbruck, so I needed to change planes in Frankfurt. Frankfurt used to be a large but manageable airport. But then the really big planes started appearing and now the airport is more like a city – HUGE. The A-380 is so large that they have it parked pretty much at the last gate all the way out on the last terminal. And the small little plane I take to Innsbruck is parked in the middle in a different part of the airport. The walk from gate to gate is incredible long. I did not run because I already booked the later flight, but it took me almost an hour from gate to gate.

So I waited until 12:30 to board my plane to Innsbruck and arrived there an hour later. The weather is just beautiful – sunny but cool. Coming from Miami I am in heaven 🙂 I am going to enjoy this beautiful weather and most of all my family here in Birgitz – Tirol – Austria.

I will post pictures throughout my stay, so stay tuned.